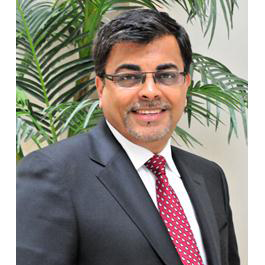 Arif Asaria was born in Nampula, Mozambique. In 1977 Arif’s family immigrated to Canada. He did his elementary, secondary and post-secondary education in Toronto, studying Economics and Philosophy. He worked for various multinationals companies as a supply chain management consultant. In 2001, he started his own business as a fine paper and pulp broker with distribution across Canada, US and Central America.  In 2006, he established a fine paper merchant distribution business based in Toronto, serving over 500 customers across Canada and the United States.

Arif has volunteered with his local Jamaats since his youth. He was a member of the Jaffari Volunteer Corp for many years. He was also a volunteer for the local hospital during his university years. These traits of giving back to the community were mainly passed on to him through the actions of his beloved departed mother.

In 2007, Arif was elected Honorary Secretary of the ISIJ of Toronto for the term 2007-2009, and subsequently for the term 2009-2011. He augmented his Secretarial duties by also taking on the much challenging role as Honorary Project Manager of Jaffari Village, which also included the Jaffari Community Centre (JCC). During his tenure as Project Manager, the ISIJ of Toronto raised over $22M Cdn donations from the Khoja Community locally and worldwide, and a further $4M was raised in asset consolidations.  The Jaffari Community Centre today is the beacon of all the activities of the Toronto Jamaat, and stands as a model amongst all the Khoja Ithnasheri Jamaats around the world, serving over 6000 congregants.

Arif is also involved in philanthropic efforts as a director of the Asaria Family Foundation, whose mission is the “eradication of poverty through education”. The Asaria Family Foundation was established in 2009. The Foundation has contributed to various World Federation and Africa Federation sponsored projects around the world, focusing on education, outreach, economic upliftment, health and welfare, and supporting the building of mosques.  The Foundation has negotiated an 80 plot cemetery and donated it to the Costa Rican Muslim community. It is in the process of negotiating the purchase of a property to establish a Congregating Centre in San Jose, Costa Rica.  The Foundation has also continued the work originated by his mother, in providing food and clothing to poor rural communities in remote regions of Costa Rica. The Foundation works with local churches and ministries to get the maximum impact in these communities.   This work will continue as an ongoing legacy on behalf of the beloved matriarch of the family, Marhuma Fatima bai Asaria binte Najarali. (Al Fateha)

He is fluent in English, Spanish, Portuguese, Hindi and Gujarati.