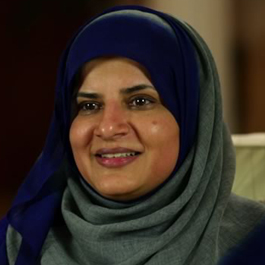 Marzia Habib-Hassan, LLB, MSW, RSW began her professional life in the high-powered world of corporate law. She later changed path to become an internationally recognised expert on family relationships, working across the globe.

Yet she has also devoted such commitment to charitable work that she has been honoured with the Canadian House of Commons Award for Outstanding Volunteer Achievement.

Habib-Hassan found working at one of the most prestigious Canadian law firms while raising her firstborn challenging to say the least. After her second child was born, she decided to take a break from law to tend to her growing family. Much self reflection led to an eventual change in career direction and she now works as a social worker and relationship consultant, assisting individuals, couples and families – work that she believes is her true calling and that she feels passionate about.

After obtaining her masters in social work, she started Family Connections International, a psychotherapy practice based in Toronto and online. Because of high demand from Muslim and South Asian populations in diverse locations, her online counselling and consultancy has developed an international client base. The online experience is modelled, as closely as possible, to in-person counselling.

Enriching lives around the world

Habib-Hassan has facilitated marriage enrichment, parenting, self-development workshops, retreats and spiritual learning groups for youth and adults all over the world, including in Canada, the US, the UK and Pakistan. She leads Quran Study Circles in Toronto for youth and adults, and speaks and writes on spirituality and social issues through her blog and podcast and on forums across North America.

As a relationship expert, Habib-Hassan has been featured on television, in web projects such as Parenting in the Digital World and in South Asian magazines. She has appeared on AhlulBayt TV both in the UK and Canada. She is the author of “Parenting in the Age of Facebook: Raising the Net Generation”, published in 2016.

Her Mission and her Vision for Family Connections International apply as much in her professional life and in her voluntary work. Her Mission is “to strengthen relationships through education, coaching and support.” Her Vision is of “highly effective individuals forming healthy relationships within strong communities.”

In addition to pursuing her passion for coaching families and individuals on building better relationships, Habib-Hassan chairs the board of Jaffari Support Services, a faith-based social services agency that she helped found in 2008.

She serves on the board of directors of NGOs including International Development and Relief Foundation (IDRF) and Habib University Foundation. She has also served on the board of the Jaffari Islamic Centre in Ontario.

In 2013, she received the Canadian House of Commons Award for Outstanding Volunteer Achievement in recognition of her contribution to minority communities in Toronto, in the fields of family strengthening and women’s empowerment.

Her other interests include real estate development, travel and cooking up a storm for friends and family.