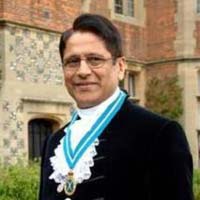 Born in Tanzania and emigrating to the UK in 1964, Nazir Jessa has shone in business and in community roles, being invited to Buckingham Palace and serving as Her Majesty the Queen’s Deputy Lieutenant of Bedfordshire.

He has excelled in business, not only founding his firm Watford Electronics but also establishing the Hertfordshire Ethnic Minority Business Network, Bedfordshire Business Link and Bedfordshire UK Online for Business, as well as serving as a member of the Bank of England Regional Economic Panel and contributing to the work of the Confederation of British Industry.

In 2003 in recognition of Watford Electronics’ groundbreaking work in the field of eBusiness, he was invited by the Queen to Buckingham Palace to celebrate the contribution of 400 UK pioneers who had made a difference to the lives of so many citizens.

He has served the Queen as High Sheriff of Bedfordshire, with his role including welcoming members of the Royal family during their official visits to the county, and as the county’s Deputy Lieutenant.

Among two dozen more community roles, he has been sole organiser of the Computers for Africa Initiative, refurbishing more than 1,000 computers to donate to schools in Tanzania; a court member and ardent supporter of the University of Bedfordshire; and an advisor and fundraiser for the Prince’s Trust.

In the Khoja community Nazir Jessa has been a trailblazer, in his youth as three-term President of East African KSI Students Union UK and founder in 1971 of the Khoja Shia Ithna Asheri Muslim community of London. In 1976 he was one of the three-member steering committee that organised the conference that established The World Federation of KSIM Communities and served as its first treasurer. In 2014 he received a WF Lifetime Achievement award. He has served the London Jamaat continuously in various posts for more than 35 years.

When appointed High Sheriff he told the investiture audience: “I’m honoured to take up this position and I look forward to serving the community. I hope to do my job well and serve my county to the best of my ability.” A local newspaper reported how he was flanked by family members who had come from around the UK and from three continents.