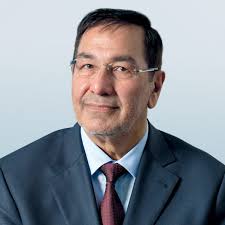 Raza Aly Hiridjee, Chairman of Group Axian, is a patriarch of the Khoja Global Fraternity, a universally respected businessman, visionary and philanthropist hailing from Madagascar.

Born in Antananarivo in 1945, Raza Aly was fortunate to have the best schooling available in Madagascar. He later headed to France in 1966 to undertake a Masters in Engineering, after which he completed an MBA in 1972.

Raza Aly joined his family’s business in 1972 which was headed by his Late Father Nurmohamed Hiridjee and his Late Brother Roshan. At that stage the family owned various textile factories which produced readymade garments through the process of weaving, knitting, printing, dying etc. The youngest brother, Bachir then joined the family business and helped catalyse their growth.

After the passing away of their Late Father the security situation in Madagascar deteriorated considerably. Roshan and Bachir moved to France whilst Raza Aly took over the management of the business. In 1983, Raza Aly opened Ocean Trade which gained a formidable reputation as a leading Import, Export and Distribution business in the Indian Ocean Islands. That subsidiary focussed on automobile imports gaining exclusivities of various multinational car manufacturers.

Raza Aly feels very fortunate to have been born into a family which provided him with a strong and stable foundation. Since the outset, the Hiridjee family has upheld a strong work ethic and innate values of success, commitment, humility and respect. These values, he insists is essential to pass onto the new generation of his family’s business leaders: Moustafa, Hassanein and Amin.

As the major shareholder, Raza Aly is proud of Axian Groupe’s achievements today. The Group is the market leader in several strategic economic sectors which play a fundamental role in the social development of Madagascar and the surrounding region, not only by boosting the economy but through contributing to the prosperity of the region.

The Group’s flagship enterprise is the ownership of Telma (Madagascar’s strongest telecommunication business). The Group has made ambitious growth in recent years with the expansion in the Telecoms sector into Reunion, Mayotte and Comoros.

The Hiridjee family has been a strong advocate of philanthropy with decades of social investment into the Khoja Community and for Humanity at large. The family has a strong belief in investing specifically in education as well as healthcare provision.

Raza Aly is unique in that not only has he led his family’s social investments he has also served in various leadership positions. He served as the Vice Chairman and then Chairman of Conseil Regional Des Khojas Shia Ithna-Asheri Jamates De L’Ocean Indien from 1983 to 1989. He has held various other leadership roles for example as an Executive Councillor of The World Federation.

Raza Aly leads his family’s extensive philanthropic activities through various notable initiatives worldwide. The family is an extensive supporter of education. Through the Telma Foundation they have built over 70 schools in Madagascar in recent years and plan to build another 100 in the next 3 years. The family has supported Khoja students through the Hiridjee Loan Scheme and are now looking at plans to even construct a university in Madagascar in the future. In the field of healthcare provision, the Family has helped the Madagascar government refurbish various hospitals and now plans on supporting the creation of new clinics to help provide for the enormous needs of primary and secondary care for the country.

Significantly, the family has also played an integral role in the development of the community worldwide – from aid relief, to microfinance, housing and worldwide interfaith activities.

Raza Aly’s burning passion is the progress of the Khoja Community. He feels that it is of paramount importance to promote the Khoja Community’s heritage and its common tongue. Examples of his investments in this area include the founding of the Mulla Asghar Resource Centre, in Toronto, Canada (link to: http://www.marcresource.org/). The Resource centre is the Khoja community’s premier cultural centre focussed on promoting Khoja Heritage and Interfaith activities through exhibitions, fine arts and literary collections. Raza Aly has envisioned founding further Resource Centres in more locations throughout the world.

He remains, as many from the community note, a discrete man. Rarely discussing his achievements but instead focussed wholeheartedly on the development of the community and humanity at large. He is indeed a visionary: a forward thinking, optimistic, progressive individual and a great credit to the entire global Khoja fraternity.