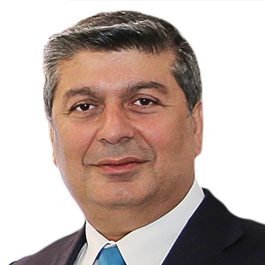 If his real estate projects break records and win international accolades, his achievements as a social entrepreneur are just as impressive. His global sustainability initiative in collaboration with the Vatican and the Church of England is a powerful force to meet vital United Nations targets.

He is a strong advocate of the need for corporations’ success to be measured according to economic, environmental and social sustainability and to establish criteria to measure their social impact.

ENSHAAbusinesses include real estate development, banking, insurance, aviation and hospitality, and under his leadership the group has accumulated a company portfolio worth US$2 billion.

Key real estate and hospitality projects include: Emirates Financial Towers, a commercial building in the heart of DIFC (Dubai International Financial Centre) which is featured in the Guinness Book of World Records for having the world’s largest robotic parking facility; and The D1 Tower, a high-rise premium residential tower ranked in the top ten architectural achievements in the world by the Emporis Skyscraper Award.

Jafaris a founding Governor ofCapital Club, a private members-only business club with sites in Dubai, Bahrain and Nairobi that has won a CNN award.ENSHAA currently operates in the United Arab Emirates, Pakistan and Australia, so his influence is truly international.

Jafar has been a philanthropist since his early years in business and is now spearheading a global sustainability project.

Jafar, along with Monsignor Sanchez from the Vatican and Bishop Alastair Redfern of the Church of England, founded Global Sustainability Network (GSN), a network established with a focus to achieve SDG Goal 8 by 2030.

Collaboration is the foundation of this platform. GSN has been created for sectors such as Faith, Governments, Business, Media and Non-Profits. It conducted meetings throughout 2016 at Lambeth Palace, the Vatican, the United Nations and Dubai Expo 2020. These events included the active participation of over 300 Global Change Makers and thought leaders from across the world to form its strategy with the widest possible buy-in.

Jafar continues to support all major initiatives that are aligned with GSN, and is open to further opportunitiesfor collaboration.

He is a member of the Global Philanthropic Circle and passionately supports several charities under his ‘strategic philanthropy’ ethos. These include Education For Employment (EFE), Walk Free, Synergos, and the IDP Foundation.