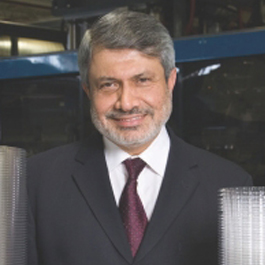 Sajjad Ebrahim received his Bachelor of Commerce Degree from the University of Karachi, Pakistan and his MBA from Columbia University in New York.

In 1977 he bought a small plastics company Par-Pak Ltd. Over the next 36 years, he painstakingly built up the Brampton company into a major player, with 900 employees and over $ 200 million in revenue.

As the Founder and President of Par-Pak, Mr. Ebrahim received numerous awards, including the prestigious Canada Award for Business Excellence in the Entrepreneur Category in 1993, and the Leader of the Year Award by the Canadian Plastic Industry Association in 2008.

After selling the company in 2013, Mr. Ebrahim continues to run his family office but now spends much of his time on philanthropic ventures. Through philanthropic undertakings, he has made significant contributions to the wellbeing of whole neighbourhoods, and benefited countless Canadians including:

Sajjad is keenly interested in the welfare of children and has supported numerous initiatives for their welfare, including their education and health.

After the leader of the year award I also got the Lifetime Achievement Award from the Canadian Plastic Industry Association in 2016.

With regards to my philanthropic activities I am involved in educating over 12,000 students in Pakistan and over 6,000 students in India and loans for higher education. In addition to that have been involved in The Society for the Prevention and cure of Blindness which was started by my Grandfather and that organization did over 55,000 cataract surgeries all over Pakistan especially in the remote parts of the country last fiscal year. Have also been involved in housing, small business loans, medical initiatives and more recently in Water.