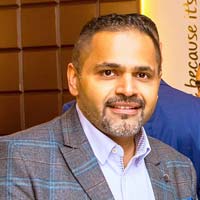 Salim Rehmatullah is an entrepreneur and philanthropist driven to solve the world’s biggest challenges through innovation.

A man who knows no limits, Rehmatullah pushes big dreams into action, spurring massive cultural and technological change. His audacious vision and magnetic personality continually inspire others to follow what feels impossible.

Born and raised in Africa, Rehmatullah has worked hard to achieve his success in the business world.

Following his own path

He knew from a young age that he wanted to run his own business. His father was probably his biggest influence, owning a successful family airline business which he hoped Rehmatullah would one day join. His son decided instead to follow his own path as an entrepreneur.

As well as being an accomplished and well-known entrepreneur and angel investor, Rehmatullah has been a Director/Chairman of dot.com companies, trade associations, charities, marketing and retail organisations. He is also CEO of SR Holdings based in Montenegro.

He is an accomplished linguist, with knowledge of Flemish, French, Gujarati, Hindi, Kutchi, Lingala, Swahili and Urdu.

Rehmatullah is a philanthropist, an endurance adventurer, a keen tennis player, a passionate charity fundraiser and a dedicated family man with his wife Saima and four children.

As a firm believer in “giving back”,he provides an invaluable contribution to his local community in Peterborough, UK, where he was President of MKSI Peterborough for 2015-2017 & 2017-2019.

He is passionate about supporting young entrepreneurs within the Khoja community, and spreading wellness and education to those in less fortunate communities around the world.