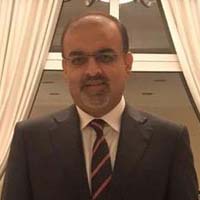 Sibtein Asaria is an entrepreneur and philanthropist. He is co-founder of the Asaria Family Foundation, a charity dedicated to eradicating poverty through education, and the Orphan Trust, which distributes monthly food rations to families in Kerbala, Iraq.

He is The World Federation Councillor for the Eradication of Khoja Poverty, leading a fact-finding mission with WF-Aid to Mumbai, India, in February 2020 to investigate poverty in the Khoja community then develop a methodology to rescue families from misery.

He has led The WF’s collaboration with the Haydari Benevolent Trust to reduce Khoja poverty through an interest-free small business loans scheme and training in computer coding in Karachi, Pakistan; he is currently working in partnership with Africa Federation to embed a similar scheme, Loans4Life, in East Africa.

He is committed to an ethos of adding value to the Khoja community and to humanity at large. He has been an active volunteer for his local Jamaats from his migration from Mozambique to Canada, on to Costa Rica and to his most recent home in Dubai, UAE.

As Ambassador for the renowned Jaffari Community Centre, a $35 million project in Toronto, Canada, he helped raise donations from the worldwide Khoja community.

As an entrepreneur, Sibtein Asaria is the founder of Grupo Alfa Corporation, a leading business conglomerate based in the Republic of Costa Rica and with interests on three more continents.

He began his business career in 1982 by starting a food-manufacturing business during his university years. He subsequently expanded the company into a coffee-roasting business, supplying customers in Canada and 17 states across the eastern United States. In 1989 he visited Costa Rica to vertically integrate the business, but identified fresh opportunities to develop a shopping mall near the bustling city of San Jose. Two years later he moved to Costa Rica and began investing in real estate projects.

His scope is global. Grupo Alfa is a conglomerate of ten major local and international companies, with different commercial backgrounds across real estate development, construction, finance, retail, family entertainment, insurance, fast food, gold trading and mining. His most recent venture is healthcare, with an emphasis on developing care homes for the elderly in Europe.

His global credentials are underlined by the fact that he speaks English, Spanish, French, Portuguese, Hindi and Gujarati.